The Making of the Hillhead Wall 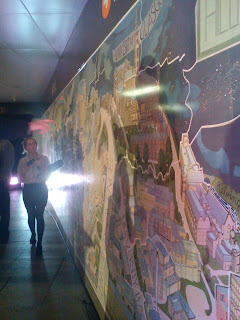 To say that it’s ambitious would be a massive understatement.  Over 120 tiles have been drawn, printed, fired and cut in a complex process that has taken years to work out and months to accomplish.  Long days, and longer nights, have been spent exploring the technical possibilities and limitations, and at times the entire project has seemed impossible.  Yet they have done it – concluding a story that began 13 years ago in a tiny restaurant on Glasgow’s Ashton Lane.

In summer 1999, most of my evenings were spent perched on a formica table in the Grosvenor Café.  Nichol and I had just started dating, and we would talk long into the night after the restaurant had closed while he worked on the Grosvenor’s new mural cycle.

Ashton Lane was already home to a far more famous artwork.  Between 1980 and 1981, Alasdair had created his extraordinary Arcadia mural in the stairwell of the Ubiquitous Chip.  While Nichol worked on his new Grosvenor piece, Alasdair was across the road expanding and restoring Arcadia, and it fell to the Grosvenor’s owner, Larry Winning, to introduce them.

They had a coffee and a chat, then went back to work.  It would be another seven years before their paths crossed again, but one feature of Nichol’s mural would spark Alasdair’s interest.  It was a panoramic view of Hillhead, the local area, drawn in simple outline and with the tiny Grosvenor Café at its heart.

By 2007, Alasdair and Nichol had become firm friends.  They were now working together to bring Gray’s new mural cycle to fruition at Oranmor, and chess and whisky fixtures had become regular features of the week.  Nichol’s cityscape had already resurfaced in Alasdair’s work once, in a beautiful re-imagining in Old Men in Love, and by 2009 their connection was so well known that Nichol was approached at his studio by SPT.  An upgrade to the tube system was planned, with a range of art across the newly modernised stations.  Could he get Alasdair involved?

For two months they met every Thursday night over chess and drinks as Alasdair considered it. 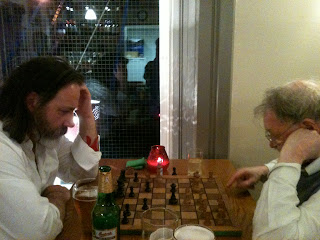 There were limitations to what could be done, and the architects’ designs added further clarity.  Initially, Gray wanted to decorate the whole space, but there were requirements for advertising, and a budget.  These constraints helped ideas to crystallise quickly, and in August 2010 Alasdair was appointed.  The idea?  A stunning panorama of the area rendered in tiles.  The question was, how would he do it?

The next year was spent in the studio exploring technical possibilities.   The contract to translate Alasdair’s finished drawing onto the wall was still out to tender, and while he drew, Nichol was figuring out how - and whether - he could pitch for the job. The approach had been made for Alasdair alone, and although he would require huge practical collaboration the practicalities, in this case, were daunting.

Nothing like this had ever been attempted before.  Alasdair’s design was enormous, a giant 9 metre by 2 metre drawing which had to be translated from pen and paper onto wall tiles.  Imposing the design over a square grid would seriously disrupt its flow, so instead a method had to be devised where the mural could be ‘drawn’ onto the surface of several massive tiles and then ‘cut out’ to follow the lines of Alasdair’s picture. 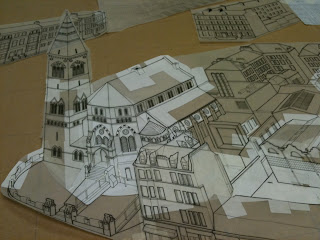 Making it work would be hugely complex.  The image would have to be cut into A3 size pieces, scanned, and then digitally stitched back together.  A process had to be found to turn these digital images accurately into wall tiles, and these tiles then had to survive high firing temperatures without cracking.  To complicate matters still further, the decision had been made to print the cityscape onto porcelain to fit with the subway’s new scheme - and porcelain presented a whole set of problems on its own.

Any one of these stages was highly innovative and fraught with complexity and risk, and every step in the journey was a minor triumph.  Before anything could even start they had first to find a method to cut the tiles to the right shapes, and in spring came the major breakthrough that would get the ball rolling.  Water jets.

Eventually, in November 2011 and after a lengthy tender process, Nichol had resolved the technical problems and was appointed to the job.  Despite knowing that the task could be done, it still had to be done, and winning the contract marked the start of an intensive and painstaking year.

A month later, the digital translation process began.  A traditionally skilled artist meeting modern technology presents its own challenges, and more than once Alasdair had to be reminded not to draw directly onto the computer screen.  Three full months were spent on the scanning and re-stitching of his drawing, followed by a further two on colouration alone. 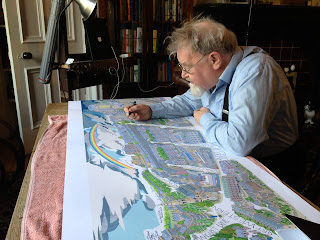 Yet with transfer maker Howard Quinn now onboard, the image could finally be translated into shaped tiles.  Quinn had perfected the art of firing transfers onto tiles using ceramic pigment, although never on this scale before, nor onto such an unpredictable surface as porcelain.  A series of test firings began to iron out any problems, and it was decided that all tiles would be pre-fired and stress drilled to avoid cracking.  At last, in spring 2012 final manufacture was underway.

With the finished tiles successfully fired using Steve Richards’ ‘sunbed’ kilns at Glasgow Ceramics Studio, the final adjustments could be made.   In June 2012, the ‘Hillhead Wall’ was for the first time laid out in its entirety on a specially made 9 metre table so that it could be checked for colouration flaws or shrinkage. 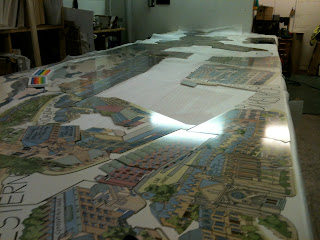 It was an incredible moment, as what had once seemed impossible was suddenly right there spread out in front of us in the studio.

While most of the design was on large tiles cut like an irregular jigsaw, Alasdair’s rainbow and River Kelvin were traditional mosaic, tiny coloured tiles that each needed laid individually by hand in a process that took a full week.  It was a repetitive job, but one that offered the chance for inventive visual flourishes. 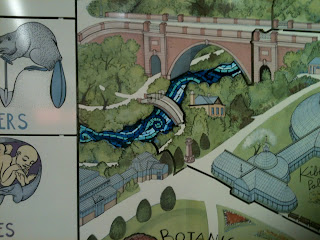 That done, it was time for the final installation.

Just as he had done thirteen years before, and just round the corner from the former Grosvenor, Nichol worked overnight on a Hillhead cityscape.  This time however, it was a far tougher job. In a busy subway station minimal disruption is key, and the entire artwork had to be kept under wraps until it was officially unveiled.  Every night for ten days the team worked from midnight till 5am, laying the tiles and then covering them again before the morning rush hour.  Sleep patterns had to be reset in advance, and door buzzers were disconnected so that no-one was woken by the postman. 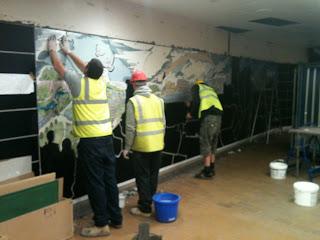 Unlike before though, for this install I wasn’t perched in the background with a mug of tea.  In a strange book-ending of our time in Glasgow, the making of the Hillhead Wall coincided with our move to begin a much longed for house build in the country.  Although we hadn’t anticipated it, the subway job had proved so intensive that we had to leave Nichol behind in the city for a full year, and family life during that period consisted of snatched weekends and scheduled phone-calls between meetings.

On  25th June though, the phone call finally came through.  The Hillhead Wall was finished – and it had come in on budget to the penny.  Between then and now, the mural has been covered by a hoarding bearing Alasdair's words, ‘Work as if you live in the early days of a better world,’ and West End commuters have passed it every morning with no idea what – if anything at all - lies behind it. 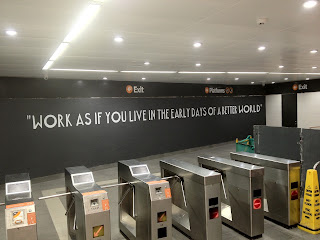 Today that hoarding finally comes down.  For the first time, Glasgow will see what Alasdair, Nichol and their team worked for so long to create, in a job that proved immensely challenging on almost every front.  Looking at the final result and thinking back to those early days in the Grosvenor, I can honestly say this.  At times it may have been far tougher than we ever imagined, but it has been worth every single second. 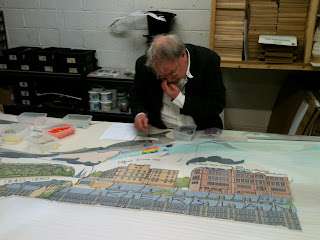 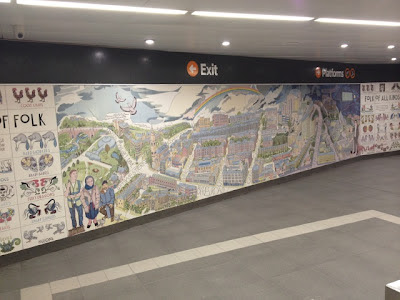